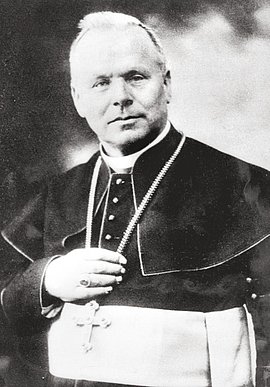 Joannes Baptista Sproll grew up in the large Catholic family of a road maintenance man in Schweinhausen near Biberach. He studied theology in Tübingen, attended a seminary, and was then consecrated as a priest by Bishop Wilhelm von Reiser in Rottenburg in 1895. Following his vicariate, doctorate, and several years as a priest in churches around Ehingen, in 1913 he was made vicar general and in 1916 auxiliary bishop of the diocese of Rottenburg, becoming bishop of Rottenburg eleven years later. After the National Socialists took power, Sproll was one of those who initially hoped for cooperation between the Catholic Church and the new authorities. However, he soon recognized that National Socialism and Christianity were incompatible. He protested against the violations of the Reich Concordat and his conferences for bishops and young people became impressive demonstrations of the Catholic will for self-assertion. When Bishop Sproll refused to take part in the referendum on Austria's "Anschluss" on April 10, 1938, which was linked with voting for the National Socialist list for the Reichstag, the National Socialists organized a series of riots against him. Bishop Sproll was expelled from his diocese in August 1938. He could not return to Rottenburg until after the end of the war.