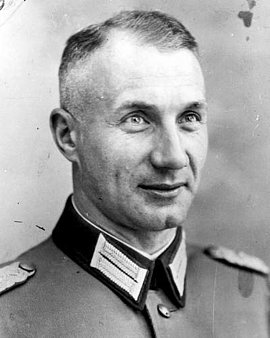 Born in Tilsit, Joachim Sadrozinski decided on an officer’s career and joined the Reichswehr in April 1926. He was married to Elfriede Hempel, with whom he had a daughter and four sons. In May 1939 Sadrozinski was detached to the War Academy in Berlin. He fought in various front-line operations in the Second World War and became a lieutenant colonel on the general staff. As a result of being wounded, in June 1944 he was transferred to the Führer’s reserve in the Army High Command. He took up his post as group leader on the staff of General Friedrich Fromm a few weeks after Claus Schenk Graf von Stauffenberg became Fromm’s chief of staff. On July 20, 1944 Sadrozinski collaborated closely with Stauffenberg after the arrest of their superior, Colonel General Fromm, in the Bendler Block in Berlin. Joachim Sadrozinski was arrested by the Gestapo immediately after the failure of the coup attempt on July 20, 1944. He was sentenced to death by the People’s Court on August 21, 1944 and murdered on September 29, 1944 in Berlin-Plötzensee.