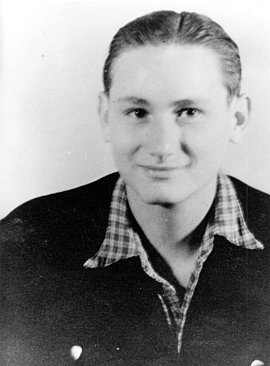 Jean Jülich grew up in Cologne with his grandparents. His father was a communist, sentenced to ten years in a penal institution in 1935. His mother Anna Maria worked in an umbrella factory and could not take care of her son. After his grandmother was also arrested, Jean Jülich had to spend several months in an orphanage and only returned to his family after his grandmother’s release from prison. Jean Jülich joined the German Youth in 1939 and later the air force branch of the “Hitler Youth”. After attending school, he began training as a machinist at the Reichsbahn repair workshop in Cologne-Nippes in the spring of 1943. He was drafted to work on the rampart on the western border but deserted from there. In the late fall of 1942, Jean Jülich came into contact with some Edelweiß Pirates. He learned the guitar and went camping with friends around Cologne. They had frequent confrontations with the “Hitler Youth”. His friend Ferdinand Steingass put him in touch with the group formed around Hans Steinbrück in Cologne-Ehrenfeld. The two of them gave Steinbrück a detonation device they had found in a basement after an air raid. Jean Jülich avoided further contact with the Steinbrück group, however, because he did not like their “goings on.” Jean Jülich was arrested on October 10, 1944, in conjunction with the prosecution of the Steinbrück group and put into Brauweiler Gestapo prison. Transferred to Rockenbach prison as the Allied troops closed in during February 1945, he was liberated by American soldiers in March 1945. He lived in Cologne for the rest of his life.