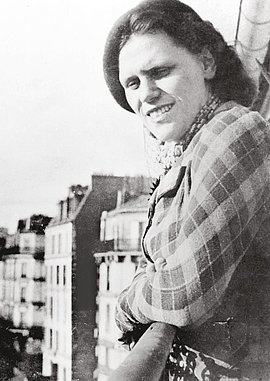 Born in 1912, the pediatric nurse Irma Götze was a member of the anarcho-syndicalist Freie Arbeiter-Union Deutschlands (Free Workers’ Union of Germany – FAUD) and active in the Leipziger Meuten, opposition groups of mainly young people. She acted as an underground courier, taking messages to and from Czechoslovakia, and helped produce illegal flyers and leaflets. In 1935, Irma Götze fled Germany for Spain, taking part in the Spanish Civil War in Catalonia in 1936. She was particularly involved in the political work of the German anarcho-syndicalists in Barcelona, and providing supplies for the militia. She was arrested by the Soviet secret police GPU in May 1937, taken to the notorious secret prison at Puerta del Angel, and later transferred to a women’s prison. After her release, Irma Götze emigrated to France in 1939. She was interned in the Gurs, Argelès-sur-Mer, and Rivesaltes camps as an “enemy alien” in 1940 and 1941, eventually ending up in the hands of the Gestapo. In 1942 the Dresden Higher Regional Court sentenced her to two years and six months in a penitentiary for her illegal work for the FAUD. After serving this term at Waldheim penitentiary, she was taken to Ravensbrück concentration camp. There, Irma Götze met her mother Anna for the first time in nine years, after the older woman had spent eight years in imprisonment. Both mother and daughter survived the war.