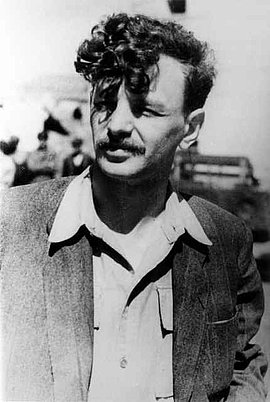 Born in Vilnius, Icchak Cukierman (Yitzhak Zuckerman) joined a left-wing Zionist youth group in Warsaw as a young man. He and his friends wanted to prevent the deportation and murder of Jews in the East through a campaign. On behalf of the underground Jewish Combat Organization ŻOB (Żydowska Organizacja Bojowa), which had been formed in the Warsaw Ghetto in 1942, he set up connections with the Polish resistance movement, and also concentrated on obtaining weapons and ammunition. When the armed uprising began in the Warsaw Ghetto in 1943, he kept up communication lines between the resistance fighters inside and outside the ghetto, as deputy commander of the Jewish Combat Organization under Mordechai Anielewicz. After the end of the uprising, he managed to help surviving ŻOB fighters escape the ruined ghetto and get away himself. He fought in Eastern European partisan groups until the end of the war, surviving and later setting up the Lohamey HaGeta’ot kibbutz north of Haifa.