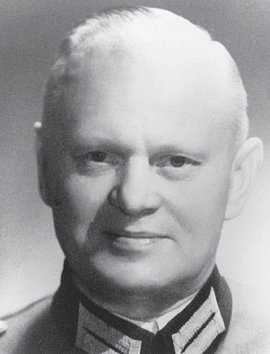 After completing his schooling, Hermann Schöne joined an infantry regiment as an officer cadet in 1908, took part in World War I and was severely injured. He attended military college and went on to serve as a General Staff officer. After the war ended he was taken over by the Reichswehr. He left the Reichswehr when his father fell ill in 1921, to run his parents’ leather factory. He was married to Charlotte Hoffmann, with whom he had a daughter and a son. At the end of 1939, Hermann Schöne volunteered for the Wehrmacht. He served as a General Staff officer at the Berlin city commandant’s office under Lieutenant General Paul von Hase from 1943 on. Schöne was involved in developing the plans for the coup and also in passing on the “Valkyrie” commands on July 20, 1944. After the coup failed, he was arrested on July 21, 1944, sentenced to death by the “People’s Court” on October 10, 1944, and murdered three months later in Brandenburg-Görden, on January 15, 1945.