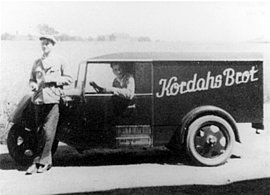 Resolute social democrats gathered in a group around August Kordahs, owner of the Germania Bread Factory in the district of Hamborn in Duisburg. Among them was Hermann Runge (photo: in front of a bread delivery truck from Kordahs’ firm). Runge had contact to the border secretary of the German Social Democratic Party in Exile (SOPADE) in the Netherlands, Gustav Ferl. Along with the bakery products, Runge and his friends distributed illegal publications and organized new social democratic groups. In May 1935 the Gestapo arrested over 200 workers and customers of the Germania Bread Factory. Four of them were murdered while in detention awaiting trial; 18 others received heavy sentences from the People’s Court. Hermann Runge was released from prison in 1944 and survived the war.