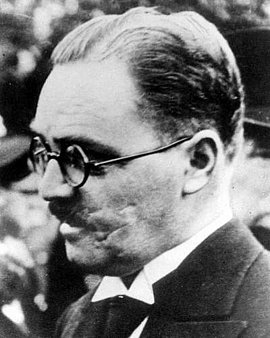 The high school teacher Hermann Kaiser joined the NSDAP early on, but later renounced National Socialism. Drafted as a reserve officer at the beginning of the war, he was transferred to the Army High Command in 1940. He was responsible for keeping the war diary as captain on the staff of the commander in chief of the Reserve Army, Friedrich Fromm. He made contact here with the military opposition around Ludwig Beck and Carl Goerdeler. Kaiser recorded many meetings and discussions between the conspirators in his private notes. He agreed to take on the post of undersecretary of state in the ministry of culture after the coup. He was also designated as liaison officer in military district XII (Wiesbaden). After the failure of the assassination attempt of July 20, 1944, Kaiser was arrested with his two brothers. His diaries were confiscated and used by the Gestapo as an important source of information on the conspiracy. Hermann Kaiser was sentenced to death by the People’s Court on January 17, 1945 and murdered shortly after in Berlin-Plötzensee.