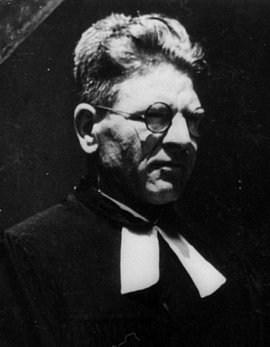 Hermann Diem grew up in an artisan’s family in Stuttgart and became a pastor in Ebersbach in Württemberg in 1934. He was regarded as a steadfast opponent of National Socialism. From 1936 on he was chairman of the Württemberg Protestant Theological Society, which represented the position of the resolute wing of the Confessional Church within the Protestant Church of Württemberg. Diem opposed every attempt to alter the Church rules to conform to the National Socialist state. In 1937 he spoke out in a sermon against teachers of religion being forced to take the oath of allegiance to Hitler. He also rejected the demand to offer thanks in church services for Hitler’s foreign policy “successes”. In 1938, when the governing body of the Church instructed pastors to swear the oath to Hitler, 50 members of the Society led by Diem united in refusing to take the oath, and explained their reasons in church services. Together with others, Hermann Diem hid Jews who were in danger and helped them to flee over the Swiss border. Despite his attitude of opposition Diem was not arrested, and survived the war.