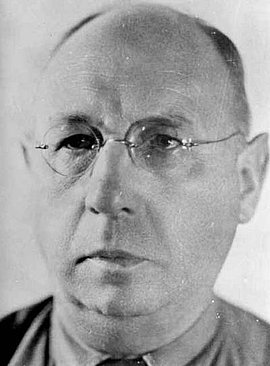 Hermann Brill, a doctor of law, was a well-known politician in Thuringia and a member of the Thuringian State Parliament from 1920 on. In 1932 he became a social democratic member of the Reichstag. He was a consistent opponent of National Socialism. After 1933 he had contact to the group “Befreiung der Arbeit” (Liberation of Work) led by Jakob Greidinger and Otto Jensen, but the Gestapo quickly discovered the group. In July 1934 Brill moved to Berlin, where he joined a circle of former members of parliament from the Social Democratic Party (SPD) and labor unionists, and explored the possibility of collaboration between social democrats and communists. Brill and the bookseller Otto Brass drew up the “Ten Points Program” of the social democratic group “Deutsche Volksfront” (German Popular Front). Brill was arrested on September 21, 1938; on July 29, 1939 he and Brass were each sentenced by the People’s Court to twelve years in a penitentiary. Brill was imprisoned in Brandenburg-Görden Penitentiary until the end of 1943, and then in Buchenwald concentration camp. He collaborated with social democratic, communist and Christian prisoners in the camp to develop programmatic principles for post-war policy. Immediately after the liberation, Brill and his friends wrote the Buchenwald Manifesto. In June 1945 he became district president of the State of Thuringia in East Germany and was dismissed by the Soviets in September 1945. After moving to West Germany he was undersecretary of state and head of the Hesse State Chancellery from 1946 to 1949. Between 1949 and 1953 he was a member of the Bundestag for the SPD, and later a university teacher in Frankfurt am Main and Speyer. Hermann Brill died in 1959 in Wiesbaden.