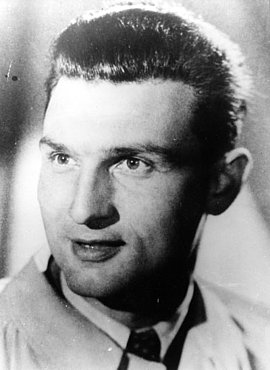 Born in 1913, the builder Herbert Tschäpe grew up in a family of Social Democrats in Berlin and joined the Kommunistischer Jugendverband (Communist Youth Federation – KJVD), starting a career as a KPD functionary. As the head of the KPD’s Neukölln sub-district, he was arrested at the end of 1933 and sentenced to a year’s imprisonment. After a further year of illegal activities in Charlottenburg, the party initially sent him into exile in Prague in 1936, and then on to Spain in the spring of 1937. He was a political delegate and later political commissar in the Hans Beimler Battalion of the Eleventh International Brigade, fought on various fronts as a machine-gunner, and was promoted to a non-commissioned officer in 1938. Following the final battles in Catalonia, he was put into French internment in February, continuing his work for the party. In mid-1941 he volunteered to return to Germany to carry on his illegal activities there. He was arrested immediately on his arrival and taken to Sachsenhausen concentration camp. Aided by his partner Lisa Walter, he escaped from the Lichtenrade sub-camp in April 1944, hiding in Berlin. There, he was involved in various resistance activities in the group around Bernhard Bästlein, Franz Jacob, and Anton Saefkow. Like most members of this group, he was arrested by the Gestapo in July 1944 and sentenced to death by the People’s Court in October. Herbert Tschäpe was murdered in Brandenburg-Görden penitentiary on November 27, 1944.