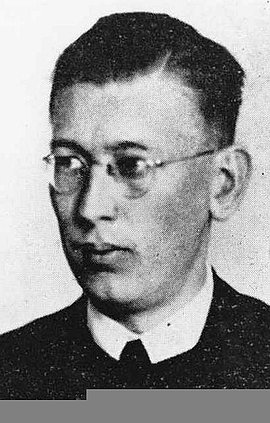 Born into a mixed Protestant-Catholic family in Berlin, Herbert Simoleit was brought up as a Catholic by his religious mother against his father’s will. He wanted to become a clergyman, but first had to help support the family and was not ordained as a priest until 1939. He worked initially in the ministry in Greifswald among resettled Germans from Poland. In 1941 Simoleit was appointed to a post in Stettin and became a popular minister for young people. As the local chaplain he looked after soldiers stationed in Stettin and organized weekly discussion circles for them in which he explored not only religious questions but also political issues, and talked about SS crimes against the Jews. One of the circle members was a Gestapo agent. Simoleit and his co-defendants in the trial against clergymen and laymen in Stettin became victims of this agent, whose detailed reports resulted in at least 40 arrests and the execution of seven death sentences. Simoleit was arrested at the beginning of February 1943 and maltreated during interrogation. On September 4, 1944 the Reich Court Martial sentenced him to death for “demoralizing the troops”. Herbert Simoleit was murdered with Carl Lampert and Friedrich Lorenz on November 13, 1944 in Halle/Saale.