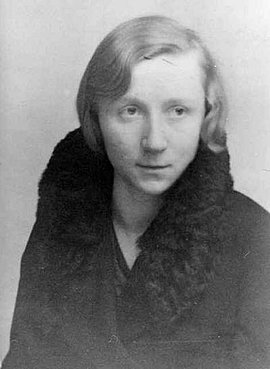 Helene Jacobs was born in Schneidemühl and grew up in very deprived circumstances with her mother, a schoolteacher, and without a father. After high school she attended a business course and found a job in Berlin in a patent attorney’s office. When the attorney was persecuted on racial grounds after the National Socialists took power, Helene Jacobs helped him and his family to flee Germany in 1939. She joined the Confessional Church and met other helpers of persecuted people at meetings of Dahlem Confessional Parish. Among them was Franz Kaufmann, whom she met in 1940; he was involved in a circle that supported the work of Pastor Heinrich Grüber’s Office. Helene Jacobs helped victims of racial persecution with food and false passports, organized hiding places and even offered accommodation in her own apartment. She was arrested in August 1943 and sentenced to two and a half years in a penitentiary by the Berlin Special Court in January 1944. Helene Jacobs survived the war in prison and worked for understanding between Jews and Christians after 1945.