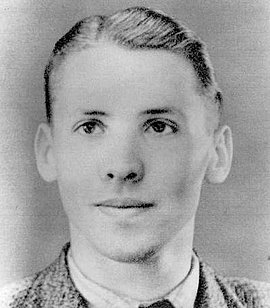 Heinz Kapelle grew up in Neukölln, a district of Berlin, and joined the labor movement early on. In 1934 he was arrested for the first time for being a member of the Young Communist League and was sentenced to two years’ imprisonment. After his release he was unemployed for two years until he found a job as a printer. In 1938 he set up an illegal youth group. Ignoring the Hitler-Stalin Pact of August 1939, he called for opposition to the war. In October 1939 the Gestapo succeeded in arresting him and some other members of his resistance group. After severe maltreatment, Heinz Kapelle was sentenced to death and murdered on July 1, 1941 in Berlin-Plötzensee. In a letter to his parents he wrote, “… remained true to myself to the very end”.