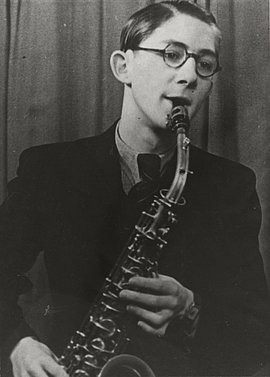 Heinz Joachim, who studied clarinet at Berlin’s Jewish Holländer Music School until 1941, was the focal point of a circle of friends that included his later wife Marianne Prager and Lothar Salinger. In the summer of 1940 Joachim made friends with Siegbert Rotholz from the Zionist youth movement. During their forced labor in the 133rd department of the Siemens electromotor works in Berlin-Spandau—the “Jewish department” made up of some 500 workers—he met Herbert Baum and he and his circle joined Baum’s group. Joachim organized a duplicating machine to produce flyers and was involved in the arson attack on the anti-Soviet propaganda exhibition “The Soviet Paradise” in Berlin’s Lustgarten on May 18, 1942. Heinz Joachim was arrested along with Herbert Baum at their workplace on May 22, 1942, and murdered in Berlin-Plötzensee on August 18, 1942.