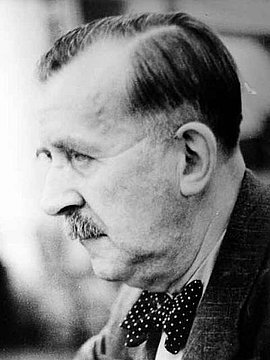 The writer Heinrich Mann was president of the creative writing department of the Prussian Academy of Arts from 1931 on, and was known as a fierce critic of the authoritarian German state. He emigrated to Paris in the spring of 1933 and became a spokesman for the German emigrants from the cultural field, and president of the Association for the Protection of the Rights of German Authors. From September 1935 he was a leader of the “Preparatory Committee for Creating a German Popular Front” against Hitler. The Committee’s appeal of December 1936 reflected the wide political and cultural spectrum of the Popular Front movement. The appeal was signed by the social democrats Rudolf Breitscheid and Georg Decker, the liberals Otto Klepper and Georg Bernhard, the leading communist Franz Dahlem, the socialist Eduard Weckerle, and Willi Münzenberg, who left the German Communist Party (KPD) shortly afterwards. In 1940 Heinrich Mann fled via Spain and Portugal to the United States, where he died in 1950 in Santa Monica.