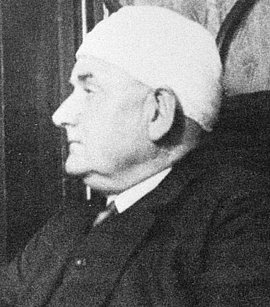 Heinrich Imbusch (photo: after an attack by the SA) became chairman of the German Christian Miners’ Labor Union in 1919 and was a member of the Reichstag for the Center Party from 1920 to 1933. In 1929 he succeeded Adam Stegerwald as elected chairman of the Confederation of German Labor Unions, the umbrella organization of non-socialist labor unions. In 1933 Imbusch managed to escape to the Saar region and in 1935 to Luxemburg, evading his National Socialist persecutors. When the German troops invaded in 1940 he fled via Belgium to France, but returned covertly to Essen in 1942 and lived there in the underground until his death on January 16, 1945.