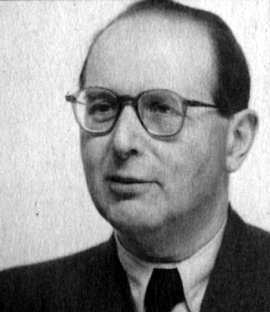 Hans Robinsohn came from a Jewish merchant’s family in Hamburg. In 1918 he joined the liberal German Democratic Party (DDP) and became one of the founders of their youth organization. This is where he met Ernst Strassmann. In the 1920s both men stood up vehemently for the protection of the Republic. Convinced of the principal merits of democracy, at Whitsun 1934 Hans Robinsohn set up a resistance group with Strassmann and Oskar Stark, a journalist in Berlin. The group succeeded in forming a network based in Hamburg that spread to Berlin and to northern, central and southern Germany. In 1938 Robinsohn went into exile in Denmark, but maintained close contact to the resistance group and established links with England for them. In 1939, in exile in Copenhagen, Robinsohn wrote a memorandum to explain the motivations, activities and goals of the German opposition for the public abroad. In 1943, immediately before the deportation of the Jews in Denmark, Hans Robinsohn, like most of the Jews in the country, was able to flee to Sweden with the help of the Danish resistance movement. He survived the war.