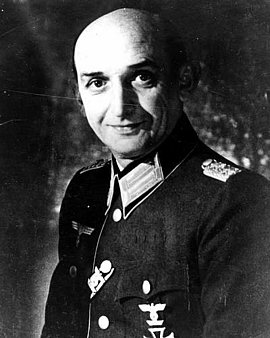 As first officer in Military District I (Königsberg), Lieutenant Colonel Hans Otto Erdmann had been informed by Claus Schenk Graf von Stauffenberg about the plans for a coup. Erdmann's assignment was to ensure that the "Valkyrie" orders were carried out in East Prussia on the day of the assassination attempt. He delegated additional security measures to Roland von Hößlin, commander of the armored reconnaissance school in Insterburg. However, Erdmann was unsuccessful in his attempt to induce General von Thadden, head of the general command in Königsberg, to support the coup. When the conspirators' orders arrived in the late afternoon of July 20, 1944, it was already clear that Hitler has survived the attempt on his life. Therefore, Erdmann had no choice but to inform Stauffenberg by telephone that the planned measures against the National Socialist leadership in Military District I could no longer be initiated. Hans Otto Erdmann was arrested by the Gestapo on August 17, 1944, and brought to Berlin for interrogation. On September 4, 1944, the People's Court under Roland Freisler opened proceedings against him and four other defendants. All were sentenced to death. Erdmann was murdered that same day in Berlin Plötzensee.