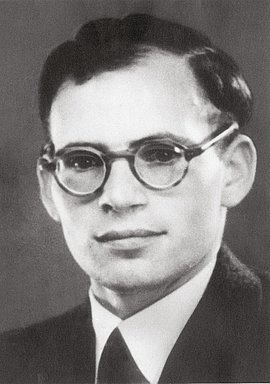 Born in Vienna in 1921, Hans Leipelt completed his schooling and labor service, followed by military service. He was discharged from the military in August 1940, as his mother was classified as Jewish under the Nazis’ Nuremberg race laws. However, his father succeeded in organizing a place for him to study chemistry at Hamburg University, where he soon became the center of a group of friends. In winter 1941/42 Hans Leipelt transferred to Munich University and studied at the renowned Chemical Institute headed by Professor Wieland, who helped victims of racial persecution on several occasions. When Leipelt and his girlfriend Marie-Luise Jahn heard of the execution of Hans and Sophie Scholl and Christoph Probst, they felt impelled to take action. Dedicated to the spirit of the White Rose, they typed up copies of the White Rose’s last leaflet and distributed them, including outside of Munich. After the murder of Professor Kurt Huber, Leipelt and his friends decided to support Huber’s family by collecting money. Hans Leipelt was arrested in Munich on October 8, 1943, but not sentenced to death by the People’s Court until October 13, 1944. He was murdered in Munich-Stadelheim Prison on January 29, 1945. Marie-Luise Jahn was sentenced to twelve years in a penitentiary by the People’s Court and liberated from Aichach Penitentiary on April 29, 1945.