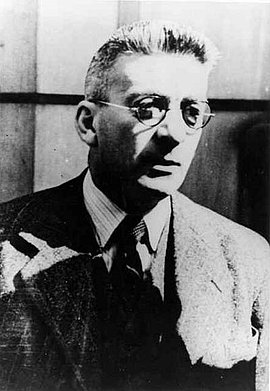 Hans Gottfurcht was a trainee and worker in the textile industry when he joined the Social Democratic Party (SPD) and the Central Federation of Salaried Employees (ZdA) in 1913. From 1919 to 1933 he was a labor union official and eventually a ZdA district leader in Berlin. After 1933 Gottfurcht worked as an insurance agent, and created an underground labor union organization in Saxony, Thuringia and Silesia. As a Jew he was particularly at risk; he was arrested by the Gestapo in July 1937. However, a year later he managed to emigrate via Amsterdam to London. Gottfurcht joined the British Labour Party; in 1940 he tried to influence the British government’s policy plans relating to Germany. At the beginning of 1941, after being briefly interned, he established the National Group of German Labor Unionists in Britain. In 1942 Gottfurcht’s father perished in the Theresienstadt ghetto. Gottfurcht later became a member of the social democratic working group “Germany and Europe after the War”, and spoke on the BBC’s German-language program. In 1945 he was co-publisher of the labor union program for postwar Germany developed by the National Group of German Labor Unionists in Britain from the late summer of 1943 on. After 1945 Hans Gottfurcht worked as deputy chairman of the International League of Free Labor Unionists in Brussels. He died in 1982.