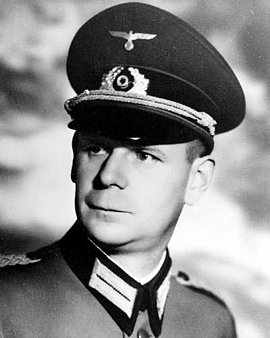 The General Staff officer Hans-Alexander von Voß was involved in the formation of the military opposition from an early point. In France in 1941, officers around the then Commander in Chief West, Erwin von Witzleben, who took part in the conspiracy, considered possibilities for assassinating Hitler. Voß, who served on Witzleben’s staff, volunteered to carry out the attack. Hans-Alexander von Voß was close to Witzleben personally, and kept up links with military opposition circles on his behalf. The planned assassination could not go ahead, as Hitler unexpectedly cancelled the inspection of troops where it was supposed to take place. From 1943, Voß was deployed on the eastern front on Henning von Tresckow’s staff in the Army Group Center. After the failure of the attempted coup of July 20, 1944, his connections with the conspirators initially remained undiscovered. During a stay with his family – Hans-Alexander von Voß was married to Gisela von Stülpnagel, with whom he had a daughter and two sons – he was tipped off that he was about to be arrested. Hans-Alexander von Voß committed suicide in Heinersdorf near Berlin on November 8, 1944, to avoid arrest and protect his friends.