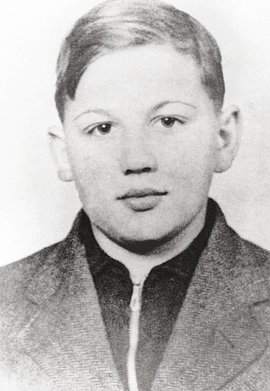 Günther Schwarz lived in his grandfather’s home in Cologne, along with two aunts and his older brother Wolfgang. According to Nazi ideology, Günther Schwarz was categorized as “half-Jewish” but he was baptized as a Protestant. His Jewish father initially managed to emigrate to the Netherlands; he was later deported to Auschwitz and murdered there. Günther Schwarz’s mother died when he was a young child. His grandfather tried to protect her children from persecution. Günther Schwarz attended an Israelite school from the age of five to seven, then a general school. He joined the Jungvolk in 1937 and was a member of the Hitler Youth from 1942 to 1944. After school he trained as a turner, completing his apprenticeship in September 1944. That same month, he was drafted to work on the rampart on the western border, from where he deserted shortly later. Like his brother Wolfgang, Günther Schwarz was a supporter of the Edelweiss Pirates. He was in close contact with Hans Steinbrück, who lived in the same building as the Schwarz family. Unlike his brother, however, Günther Schwarz did not heed warnings against Hans Steinbrück. Günther Schwarz actively participated in assaults and thefts. As a “half-Jew” he was no longer allocated a ration card and used the thefts to obtain food on several occasions. The Gestapo became aware of Günther Schwarz during its investigations of the Steinbrück group. After his arrest on October 10, 1944, he was initially interrogated in the El-De-Haus in Cologne and then taken to Brauweiler Gestapo prison, interrogated several times, and badly beaten. Günther Schwarz was publicly hanged in Cologne on November 10, 1944.