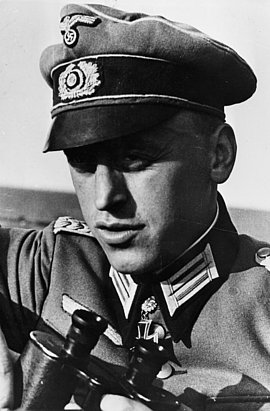 Georg Freiherr von Boeselager, an enthusiastic show-jumper, hoped for a career as a cavalry officer and joined the 15th Cavalry Regiment in Paderborn directly after leaving school. He was promoted to the rank of second lieutenant in 1936 and became a first lieutenant in the spring of 1939. At the beginning of 1943, his brother Philipp arranged a meeting for him with Field Marshal von Kluge, to whom Georg explained his ideas regarding a more modern deployment of cavalry units. He was successful; shortly after the meeting, he was charged with structuring the Cavalry Regiment Center according to his ideas, working in close cooperation with Henning von Tresckow. The two of them planned the independent cavalry unit not only for deployment on the Eastern Front, but also to play a role in the plans for a coup. When an opportunity for an attempt on Hitler’s life arose on a visit to the front in March 1943, Georg and his brother Philipp Freiherr von Boeselager volunteered to carry out the attack. Hitler was to be shot at a formal dinner, if possibly by several marksmen so that they were more likely to kill him. The conspirators assumed that Hitler wore a bulletproof vest and his head covering was also reinforced with metal. The plan was abandoned because Field Marshal von Kluge withdrew his approval. The conspirators around Henning von Treskow made another attempt by smuggling a bomb onto Hitler’s plane but this also failed. Georg Freiherr von Boeselager died in battle on the Eastern Front the age of 29, in August 1944.