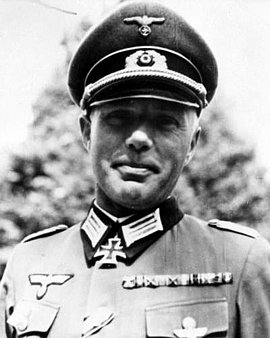 Fritz Jaeger entered Lichterfelde Military College shortly before the First World War and resigned his commission in November 1918, but went on to fight in the battles in the Baltic Provinces. In the 1920s he worked as a self-employed credit broker for several years. His sympathy for German nationalism led him to serve temporarily as adjutant to the regional leader of the Stahlhelm (Steel Helmet federation of combat veterans) in Berlin. At the end of 1934 he accepted recommission for the Reich Army. In 1942 Jaeger served in the Army High Command, where he met General Olbricht. He offered his support to the conspirators as commander of the tank corps in military districts II (Stettin) and XXI (Kalisch). On July 20, 1944, Jaeger reported to Olbricht in the Bendler Block. Shortly afterwards, he arrested and disarmed two SS officers. After the failure of the coup he was arrested, sentenced to death by the People’s Court on August 21, 1944 and murdered the same day in Berlin-Plötzensee.