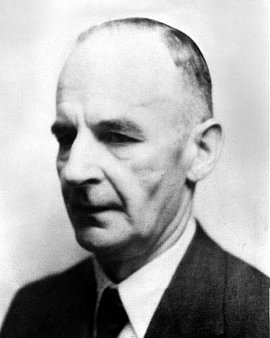 After the First World War Fritz Goerdeler initially worked as an attorney and mayor in Marienwerder, but was forced to resign his post by the National Socialists in 1933. He then became city treasurer of Königsberg. He was married to Susanne Ulrich, with whom he had three daughters and a son. Like his elder brother, Carl Friedrich Goerdeler, he refused to accept the situation in Nazi Germany and finally followed him into the resistance. Carl Goerdeler used the close family tie to his brother - their wives were sisters as well - to tell Fritz Goerdeler of his secret plans and get his support. At the beginning of 1943 Fritz Goerdeler took on the task of recruiting allies in Königsberg for the planned coup and was involved in contacting military resistance circles. After the failure of the coup attempt on July 20, 1944, the Gestapo arrested Fritz Goerdeler as well as other family members. Goerdeler was sentenced to death on February 23, 1945 and murdered on March 1, 1945 in Berlin-Plötzensee.