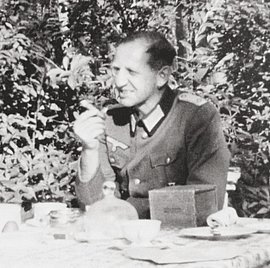 Born in London, the administrative lawyer Fritz-Dietlof Graf von der Schulenburg studied in Göttingen and Marburg. He passed his entrance examination for the civil service in Potsdam in 1928, joining the NSDAP in 1932 as a low-ranking civil servant. He married Charlotte Kotelmann in 1933, and the couple later had five daughters and one son. He held various positions in East Prussia after the National Socialists took power, working as the personal assistant to the Gauleiter and municipal government president Erich Koch in Königsberg for several months. He was increasingly repelled by his first-hand observations of National Socialist rule. After the murders of political opponents and high-ranking SA leaders at the end of June 1934, his distance to National Socialism grew. He became district administrator of Fischhausen in November 1934, deputy police president of Berlin in 1937, and government president and deputy regional commissioner of Breslau two years later. He came into contact with the military opposition in 1938, supporting the attempted coup linked with the “Sudetenland crisis” in September of that year along with his friend and relative Ulrich-Wilhelm Graf von Schwerin von Schwanenfeld. Following the pogrom of November 9, 1938, he took part in a discussion circle initiated by his friend Peter Graf Yorck von Wartenburg, on the foundations of a new Reich constitution. He was later associated with the Kreisau Circle. He was called up into the army as a reserve officer in the 9th Potsdam Infantry Regiment in 1940. Due to his wide range of public administration experience, he mainly prepared the staffing for the planned new beginning after the regime change. Planned as an undersecretary of state to the designated interior minister Leber, he was part of the innermost circle of conspirators to the very end. After the failed coup, he was arrested in the Bendler Block late in the evening of July 20, 1944, sentenced to death by the People’s Court on August 10, and murdered the same day in Berlin-Plötzensee.