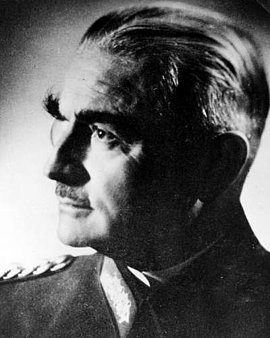 In 1936 the career officer Friedrich von Rabenau was assigned by Colonel-General Ludwig Beck, chief of the general staff, to build up and direct the Army archives. In this position Rabenau consistently opposed any form of ideological distortion. His Christian beliefs made him a convinced opponent of the National Socialist regime. Both at work and off duty he followed his own political convictions without reference to any particular resistance groups, opposing the provocative actions of the National Socialist dictatorship as an individual. Rabenau was married to Eva Kautz, with whom he had two daughters. He was seen as an important intermediary for the resistance groups around Beck and Carl Friedrich Goerdeler. In mid-1942 he was relieved of his post as chief of the Army archives and retired from the Army. In retirement, Friedrich von Rabenau studied Protestant theology and gained the licentiatus theologiae in November 1943. After the unsuccessful coup attempt of July 20, 1944, Rabenau was arrested on July 25. He was imprisoned in Ravensbrück concentration camp, Lehrter Straße Prison in Berlin and the Gestapo headquarters in Prinz-Albrecht-Straße before he was murdered in Flossenbürg concentration camp between April 9 and April 14, 1945.