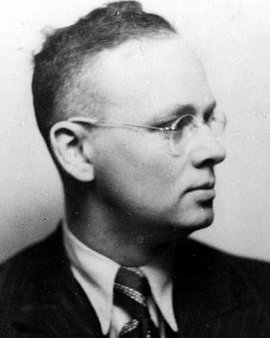 Friedrich Justus Perels studied law, but after his state examinations in 1933 and 1936 he was not accepted into the judicial service on “racial grounds”. He was married to Helga Kellermann, with whom he had a son. Perels, who had had close links with the Protestant Church since his youth, provided legal counseling for members of the Confessional Church who had come in conflict with National Socialism. He collaborated closely in this with Martin Niemöller and Dietrich Bonhoeffer, and increasingly gave support to persecuted Jews. Through Bonhoeffer, in 1940 Perels came in contact with the resistance circle in the Office for Foreign Affairs/Counterintelligence, and was involved in the preparations for “Enterprise Seven”. After the unsuccessful coup attempt of July 20, 1944 he was arrested by the Gestapo. Friedrich Justus Perels was sentenced to death by the People’s Court on February 2, 1945. On the night of April 22-23, 1945, he was murdered by a special detachment from the Reich Security Main Office on derelict grounds near Lehrter Straße Prison in Berlin.