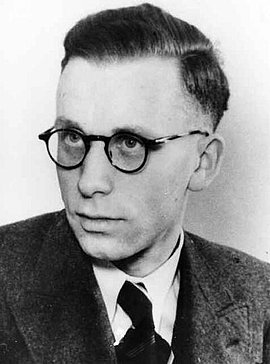 The young apothecary Fred Joseph was youth leader of the Würzburg Catholic Boy Scouts of St. George. He was arrested in 1936 for holding a banned “pledge ceremony”. Forced to leave Würzburg, he established a Catholic youth group in Pforzheim. After the November 1938 pogroms, Joseph’s father, who was Jewish, was imprisoned in Buchenwald concentration camp but was able to emigrate to the Netherlands in February 1939. The Gestapo arrested Fred Joseph again on October 22, 1941 for his Catholic youth work. On January 26, 1942 he was sentenced to 12 months’ imprisonment by Mannheim Special Court. After his release from prison on October 26, 1942 the Würzburg Gestapo arrested Joseph once again on November 13, 1942 on the instructions of the Reich Security Main Office. He was accused of being a member of an international Boy Scouts underground movement. Fred Joseph was committed to Auschwitz concentration camp in December 1942 and presumably murdered there on January 21, 1943.