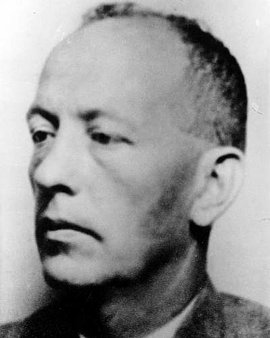 Franz Leuninger learned the trade of bricklayer and later headed various district organizations of the Christian labor unions in the Weimar Republic. He was married to Anna Paulina Meuser, with whom he had three sons. He became a member of Breslau city parliament for the Center Party in 1930, and stood as a candidate in the Reichstag elections in March 1933. Leuninger was a resolute opponent of National Socialism. After the labor unions were smashed in the early summer of 1933, he became managing director of the cooperative housing association “Deutsches Heim”. This enabled him to maintain links with persecuted persons and opponents of the Nazi regime. Later he came in contact with the resistance groups around Carl Goerdeler and Ludwig Beck. The conspirators persuaded Leuninger to take the post of regional commissioner of the province of Silesia in the event of a successful coup. After the assassination attempt of July 20, 1944, he was arrested on September 26, 1944 and held in Lehrter Straße Prison in Berlin for several months. He was sentenced to death by the People’s Court on February 26, 1945 and murdered on March 1, 1945 in Berlin-Plötzensee.