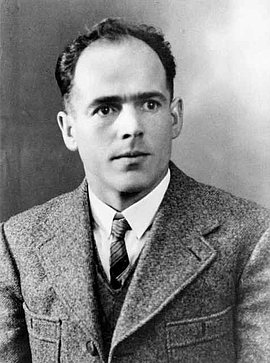 Franz Jägerstätter was born in St. Radegund in Upper Austria in 1907; his parents were too poor to marry and he was born illegitimate. At the age of twenty, he started work as a miner in Styria, returning to his village in 1930. He took over his stepfather’s farm a few years later. He married Franziska, a local maid, in 1936, and they had three daughters. In 1938, Jägerstätter refused to vote for Austria’s annexation after German troops had entered the country. He joined the Third Order of Saint Francis in 1940. His opposition to the Nazi regime grew stronger, especially due to the persecution of Catholic priests and murders of the sick and disabled. Called up to the Wehrmacht for the first time in 1940, he managed to return to his family after a short time, as his home community classified him as “indispensable.” When Jägerstätter was called up again in March 1943, he decided to refuse to swear allegiance to the flag and to serve in the armed forces, on the basis of his Christian convictions. Neither his family nor the priests he was close to could persuade him to change his mind. Franz Jägerstätter was arrested, sentenced to death for demoralizing the troops by the Reich Court Martial in Berlin on July 6, 1943, and murdered in Brandenburg-Görden penitentiary on August 9, 1943.