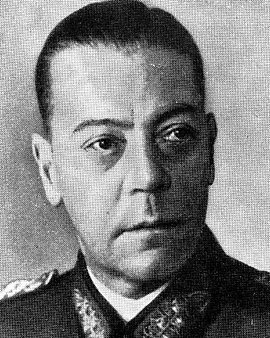 Ferdinand Friedrich Schaal joined a dragoon regiment in 1908. After the end of the First World War he was accepted into the Reichswehr as a cavalry captain. From September 1943 on he was “Wehrmacht representative in the office of the German minister of state and commander in the military district of Bohemia and Moravia”. On the evening of July 20, 1944, the news of the attempt to assassinate Hitler reached Prague via the radio. Shortly afterwards, the first teleprint message from the conspirators arrived at the military district command in Prague. After reading it, Schaal tried to obtain a clear picture of the situation in Berlin from Colonel General Fromm, his immediate superior in the Berlin center of the conspiracy, but was only able to contact Erich Hoepner. Schaal intended to observe the “Valkyrie” orders, although not unconditionally. He was arrested the next morning on Heinrich Himmler’s orders and imprisoned until April 1945. Ferdinand Schaal survived the war.