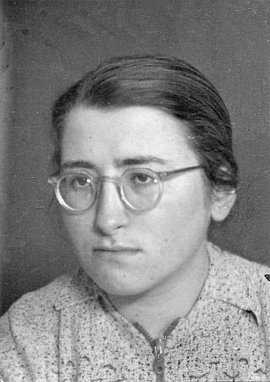 Eva Fleischmann grew up in a strictly religious Jewish family in Berlin-Moabit. In the spring of 1939, she began training at the Jewish kindergarten teachers’ college run by the Reich Association of Jews in Germany. After gaining her teaching qualification in 1941, she had to perform forced labor at the Spindler laundry in Spindlersfeld. When she and her parents were sent to a Berlin collection point at the beginning of March 1943, she made a last-minute escape. She sought help from Margarethe Fraenkel, the former head of the teachers’ college. Fraenkel put her in contact with the circle of helpers formed around the Quaker Elisabeth Abegg, and she was able to hide in the home of the patent lawyer Richard Linde in Hohen Neuendorf. At the same time, Fleischmann joined the underground Zionist youth group Chug Chaluzi, of which her cousin Jizchak Schwersenz was already a member. At the end of 1943, she came into contact with members of the Confessional Church in East Prussia, who took care of escaped Jews. She spent more than a year hiding with a series of pastors’ wives in Zinten, Preußisch Bahnau, in Rehhof/West Prussia, in Heiligenbeil, in Paterswalde and in the Bloestau home of Adolf Bunke, a lawyer working for the Confessional Church. In the second half of 1944, she obtained papers identifying her as an “Aryan” victim of bomb damage, which she used to travel to Göttingen. She experienced Germany’s liberation in a Protestant parsonage there.