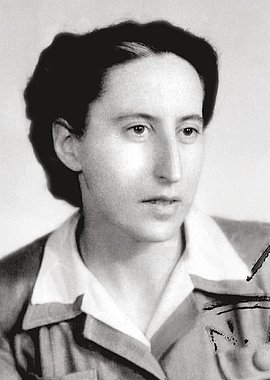 Eugenie Schmerling and her future husband Günter Nobel were arrested in Berlin in 1936 because of their activities for the illegal KPD and given a penal sentence of several years. Upon their release, they had to leave Germany in August of 1939 because of their Jewish origins. They escaped to Shanghai via Genoa. In China, they lived under difficult circumstances until 1941, when Eugenie Nobel was employed as an editor for the radio station of the Soviet news agency TASS. The Nobels joined the German Communists in Shanghai and prepared for future “party work” in Germany. Eugenie and Günter Nobel survived the Japanese occupation of Shanghai in the ghetto. They returned to Germany in 1947 and continued their political work in East Berlin.