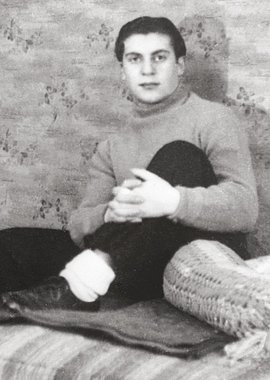 Eugen Herman-Friede was born in Berlin to Jewish parents, who later divorced. His mother Anja married the non-Jewish commercial representative Julius Friede, who lost his job in 1933 because of their marriage. Eugen attended the Jewish Middle School until he was forced to work in the Jewish cemetery in Weißensee in 1942. Fearing he would be picked up by the Gestapo, Julius Friede found a hiding place for his stepson at the home of a gas station attendant in Berlin-Kreuzberg at the end of January 1943. Eugen then stayed with the Horn family in Blankenburg until Julius Friede’s sister took him into her home in Berlin-Schöneberg. From August 1943, Eugen lived with the Winkler family in Luckenwalde. In April 1944, he moved into a Luckenwalde guesthouse where his parents were also hiding. Despite his risky situation, Eugen took part in the resistance activities of the Community for Peace and Reconstruction until he and his parents were arrested in December 1944. There followed an odyssey through Berlin’s prison system. From a Potsdam prison he was sent to Schulstraße in Berlin-Wedding, before being transferred to the prison at Alexanderplatz. His last station was the bunker cells at Große Hamburger Straße 26. He was unexpectedly released on his 19th birthday in April 1945. Anja Friede returned from the Theresienstadt ghetto that same year. Eugen’s stepfather Julius Friede was found dead in the Alexanderplatz prison on December 19, 1944, having apparently committed suicide.