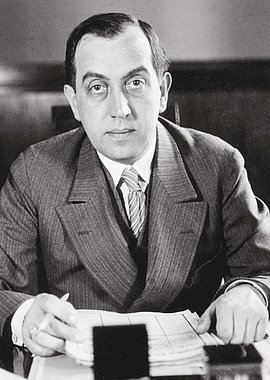 The Social Democrat Ernst Reuter became mayor of Magdeburg in 1931 and a member of the Reichstag in 1932. He was dismissed from his offices in 1933 and interned and severely mistreated in Lichtenburg concentration camp on two occasions up to the fall of 1934. Reuter and his family emigrated to Turkey in 1935. He worked in the ministries of commerce and transport in Ankara, where he played a key role in the creation of the Turkish administration. He later also worked as a lecturer, and then as a professor. He was in contact with other German emigrants in Turkey and elsewhere and was one of the cofounders of the German Freedom Movement in Istanbul in 1943. Ernst Reuter returned to Berlin in 1946, becoming a public figure symbolic of the Berliners’ will for freedom as mayor of West Berlin from 1948 until his death in 1953.