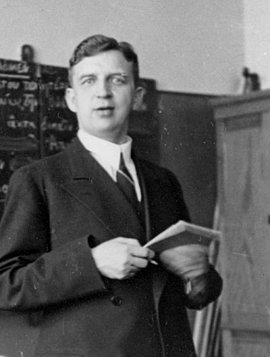 Ernst Hadermann was taken prisoner a few weeks after the German attack on the Soviet Union, severely wounded. After World War I he had studied literature and history, becoming a high school teacher in 1930. He volunteered for the Wehrmacht in 1939 and took part in the war against Poland and France. He first intensively contemplated the Nazi state in the Yelabuga prisoner-of-war camp for officers, addressing German troops in the flyer “A German captain’s vow,” hundreds of thousands of copies of which were distributed in 1942. In the leaflet, he described the National Socialist state as a criminal regime that would destroy Germany’s culture through the war. In the summer of 1943 he joined the National Committee “Free Germany,” where he was responsible for appealing to the middle classes.