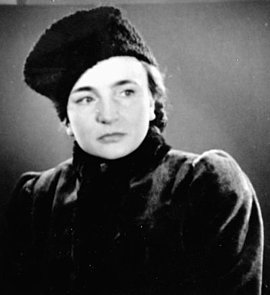 Else Megelin, born in Berlin in 1905, joined the Young Socialist Workers at the age of 15, and the SPD soon afterwards. She lost her job as an administrative employee for political reasons in 1933, and was imprisoned from August 1933 to May 1934. She was an active member of the socialist resistance group Roter Stoßtrupp (Red Shock Troop), in which her husband Kurt Megelin played a leading role. Later, Else Megelin worked in Wilhelm Leuschner’s factory, camouflaging her political activities alongside her husband. Despite several arrests, she survived the Nazi regime.