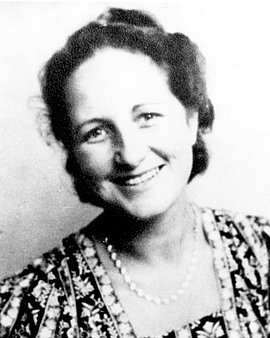 Elisabeth Hohenemser came from a once-wealthy family. Her father was killed in action in the First World War in 1914. After her education in Offenbach and Berlin she worked as a freelance graphic artist at the Reich Office for Industrial Safety in Berlin. She was refused permanent employment because she was “half-Jewish”. In 1934 she married the sculptor Kurt Schumacher. Elisabeth Schumacher was involved in the discussions and first actions of the resistance circle around Harro Schulze-Boysen. She photocopied and reduced illegal leaflets. In August 1939 she and her husband Kurt Schumacher organized help for a persecuted man, Rudi Bergtel. Immediately after the beginning of the war against the Soviet Union she took charge of a radio code and money from the Soviet embassy representative, Alexander Korotkov. She helped to distribute and circulate illegal publications and looked after her relatives threatened with deportation. One of her uncles, Moritz Hohenemser, was deported to Theresienstadt ghetto. She and Philipp Schaeffer tried to save her uncle Richard Hohenemser and his wife, who attempted suicide. At the beginning of August 1942 she gave accommodation to the parachute agent Albert Hößler, who had just arrived from Moscow, and arranged for him to meet Harro Schulze-Boysen and Hans Coppi. She was arrested on September 12, 1942 and taken to the police headquarters at Alexanderplatz. Elisabeth Schumacher was sentenced to death by the Reich Court Martial on December 19, 1942 and murdered three days later with her husband in Berlin-Plötzensee.