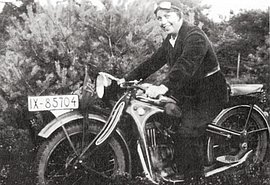 Elisabeth Ostermeier, née Gottschalk, trained as a sales clerk at a production cooperative’s butchery, having left school at the age of 14. She would have liked to be a teacher but her family could only afford to send her brother to high school. She joined the Red Falcons and the Young Socialist Workers (SAJ) at 13, followed by the SPD in 1931. Her parents were both active Social Democrats. Elisabeth Ostermeier worked as a sales clerk in the production cooperative until she was dismissed by the National Socialists in 1933. In December of that year, she found work in the bakery owned by Ernst Tessloff, a Social Democrat and former editor of the Harburger Volksblatt. Tessloff organized the Social Democratic resistance in Hamburg-Harburg from the bakery. Elisabeth Ostermeier got her driving license during this time, and used a bakery van to deliver bread and illegal SPD publications to Social Democrat customers. She married in 1935 and moved to Minden with her husband. She was arrested on December 18, 1936, and put into Hildesheim prison for several months. Her activities had been betrayed. After World War II, Elisabeth Ostermeier was a member of the first Hamburg city parliament, representing the SPD. She held her seat for 32 years.