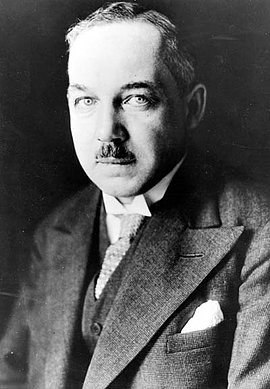 The liberal politician Eduard Hamm was Bavarian minister of trade, industry, and transportation immediately after the First World War. In 1922, he was appointed state secretary in the Reich chancellery. He was married to Maria von Merz, with whom he had two daughters and a son. Hamm was a member of Chancellor Wilhelm Marx's cabinet as minister of economics. From 1925 to 1933, he was the director of the Association of German Chambers of Industry and Commerce and repeatedly and harshly criticized the economic program of the NSDAP. After 1933, Hamm refused to join the NSDAP and withdrew from politics. He established law offices in Berlin and Munich and maintained old political contacts, primarily with the resistance circles around Otto Gessler, Franz Sperr, and Carl Goerdeler. Goerdeler planned to appoint Hamm state administrator for Bavaria should a coup succeed. Arrested and abused on September 2, 1944, Eduard Hamm took his own life on September 23, 1944, by jumping out of a window during a Gestapo interrogation.