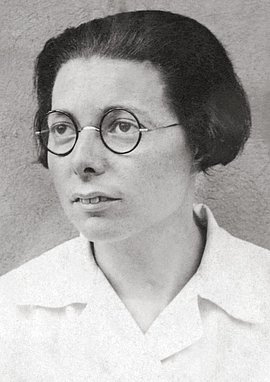 Edith Wolff, born in Berlin in 1904, studied philosophy but never graduated from university. She was brought up as a Protestant, but turned to Judaism in 1933 in protest against the National Socialists, and became a convinced pacifist and Zionist. Although she was classified as a “1st degree Mischling (half-breed)” by the Nuremberg race laws and was in danger herself, she had numerous contacts with persecuted Jews and helped many of them to escape. In the spring of 1943, an underground Zionist group formed around Edith Wolff and Jizchak Schwersenz, which grew to forty members, some of them from the Zionist youth movement. It was the only known underground Zionist group of its kind in Germany, and survived for more than a year. The members were united by their will to “keep going,” to support the deportees in the eastern camps and to try to survive by escaping abroad. When Edith Wolff was ordered to an interview by the Gestapo in summer 1943, she managed to conceal her links to Jews in hiding, but was sentenced to a long imprisonment for passing food ration cards to Jews. Edith Wolff survived her time in 18 concentration camps and prisons.