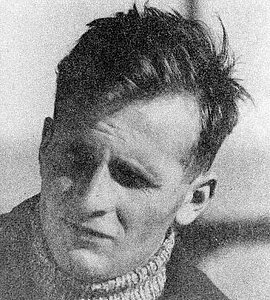 Born in Stuttgart, from 1920 on Eberhard Koebel was a member of the Wandervogel, an emancipatory youth movement for hiking and camping. In 1926 he joined the German Freischar, a fusion of Wandervogel and Boy Scouts groups; a year later, under the pseudonym “tusk” he advocated the formation of a unified German youth association for boys. On November 1, 1929 Koebel established the “dj 1.11.” as a “secret conspiracy” to renew and mobilize the youth movement. He saw the Hitler Youth as the major new enemy. In the spring of 1932 he resigned as head of the “dj 1.11.” and joined the Young Communist League and the German Communist Party (KPD). Koebel was arrested on January 18, 1934 for trying to gain influence over the Hitler Youth. After being severely maltreated in custody several times, he was released from Columbia Haus concentration camp in Berlin at the end of February 1934, but banned from future work with young people. After the SA (Stormtroopers) was eliminated in the National Socialist power struggle around June 30, 1934, Koebel escaped being murdered by fleeing via Sweden to London. In England, Koebel kept in contact with the Free German Movement, the precursor of the Free German Youth, and returned to Berlin in 1948 after the end of the war.