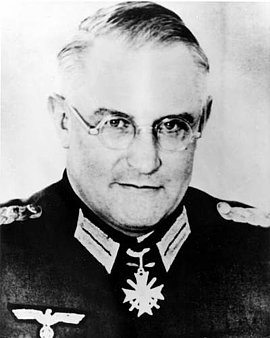 The young career officer Eberhard Finckh met Claus Schenk Graf von Stauffenberg and Albrecht Ritter Mertz von Quirnheim at the Berlin War Academy. Finckh was married to Annemarie von Weyrauch, with whom he had two daughters and a son. He firmly rejected National Socialism and his family supported him in this. After the German invasion of Poland he was initially deployed in the east. Later, as colonel (G.S.) and chief quartermaster for the commander in chief in the west in Paris, he joined the circle around military commander Carl Heinrich von Stülpnagel. Finckh was involved in planning the coup attempt in the west with Stülpnagel and his adjutant Cäsar von Hofacker. On July 20, 1944 in Paris, Finckh received the prearranged news of the attempted assassination in the “Führer’s” headquarters, the “Wolf’s Lair”, and reported Hitler’s death to his superior, General Günter Blumentritt. In Paris the Gestapo and SD (Security Service) could now be arrested and disarmed as planned. The conspirators only called a halt to this operation when they learned that Hitler was still alive. Eberhard Finckh was arrested a few days later. He was sentenced to death on August 30, 1944 by the People’s Court under Roland Freisler and murdered the same day in Berlin-Plötzensee.