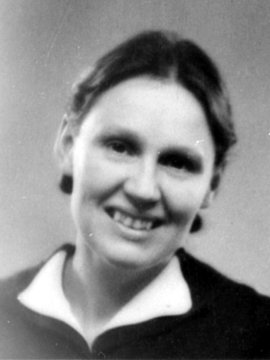 Dorothee Ziegele was born in Steinkirchen in 1902, the second daughter of the pastor Paul Eugen Ziegele and his wife Berta. She was influenced by the youth movement. In the winter semester of 1921/22, she began studying German literature in Leipzig. In parallel, she trained at the Leipzig librarian school, where she qualified for the mid-level library service in 1923. She obtained a post at Tübingen university library that year. While working there, Dorothee Ziegele met Harald Poelchau. In 1926 she took a post in the library of the Reich Statistics Office in Berlin. Dorothee and Harald Poelchau married in Herrenberg/Württemberg on April 12, 1928. Both of them were against the Nazi regime from the very beginning. Their son Harald Stephan junior was born in 1938. Dorothee Polechau was actively involved in her husband’s covert aid for Jews in hiding and the relatives of political prisoners. She obtained food and looked after people, whom the couple took into their own home. She also made various contacts on behalf of those in need of accommodation. She prepared meals, which her husband managed to send to inmates in the various prisons. In the last weeks of the war she left Berlin with her son Harald, but returned to the city in the summer of 1945.