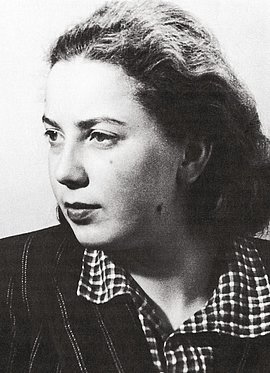 Dagmar Petersen was born in Berlin. Her mother was Jewish and her father was not, which made her a “first-grade half-breed” in the eyes of the National Socialists. She attended the Rütli School and then the Elbe School, graduating in 1936. She joined the communist Young Pioneers youth association in 1932 but it was banned in 1933. After completing her “compulsory year”—12 months of agricultural or domestic labor for women under 25, introduced in 1938—Dagmar Petersen began working as a shorthand typist. At a reunion of former Rütli pupils in January 1940, she met up with Hanno Günther again, who asked whether she would be interested in working in his resistance group. Dagmar Petersen took part in group evenings in Hanno’s parental home, where they listened to banned radio broadcasts from London. The station reported in German on the course of the war and other events that were distorted or not mentioned at all in National Socialist media. The group went on to talk about what they had heard, while playing a German station to disguise their activities. They also discussed banned political books and distributed flyers. Dagmar Petersen was arrested on August 7, 1941, and taken to Berlin-Charlottenburg remand prison. Her trial before the “People’s Court” was not until over a year later, in October 1942. The judge sentenced her to seven years in a penal institution for “preparation for high treason.” The other young people tried alongside her were sentenced to death.