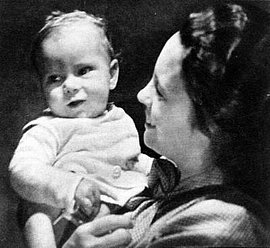 Born in Munich, the well-known actress Carola Neher (photo: with her son Georg) was a close sympathizer of the German Communist Party (KPD). She was married to the writer Klabund (Alfred Henschke) from 1925 until his death in 1928. In 1933 she emigrated to Prague with her second husband, Anatol Becker, and in 1934 to Moscow. Their son Georg was born in December 1934. Anatol Becker was arrested in 1936, sentenced to death by a Soviet court in 1937 and executed by firing squad. In July 1936 Carola Neher was also arrested by the Soviet secret police and was sentenced to ten years’ imprisonment in 1937. She died of typhoid on June 26, 1942 in Sol-Iletsk camp near Orenburg. Her son was initially brought up by friends, then in a Soviet children’s home, without knowing his parents’ fate.