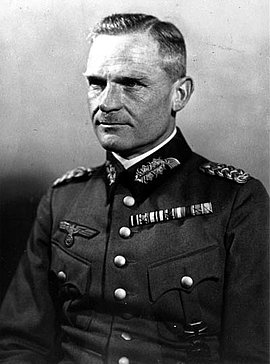 Carl Heinrich von Stülpnagel chose the path of a career officer soon after gaining his school-leaving certificate in 1904. He took part in World War I as a general staff officer. A career soldier, he worked closely with Ludwig Beck in the Reichswehr, heading the foreign armies department in the Troops Office. Like Beck, Stülpnagel had doubts in the National Socialist leadership and was part of the inner circle of Hitler's opponents in the military from as early as 1938. He led the 17th Army in the invasion of the Soviet Union in 1941. Stülpnagel issued a number of commands ordering severe treatment of Jews, "whereby Jewish Komsomol members in particular are to be regarded as practitioners of sabotage and formations of armed youth gangs." From mid-1942 on, Stülpnagel was military commander in France, where he ordered several hostage shootings before authority for that area was taken over by the Higher SS and Police Leader in France. On several occasions, Stülpnagel objected to the latter's brutal acts of repression, eventually finding a confidant in Hans Speidel, who forged a link to the preparations for the coup in Berlin on his behalf. On July 20, 1944, Carl Heinrich von Stülpnagel attempted to persuade Field Marshal Günther von Kluge to take part in the coup. He also ordered the detention of the SS and Gestapo units in Paris. The next day, he intended to commit suicide on the battlefield in Verdun. His attempt failed, resulting in severe injuries. He was sentenced to death on August 30, 1944, and immediately murdered in Berlin-Plötzensee.