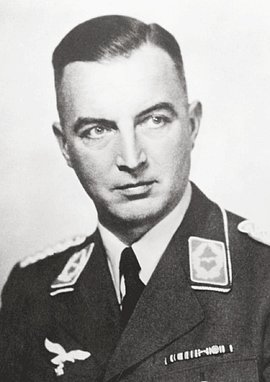 Returning to Germany after being held by French forces as a prisoner of war in Greece, Cäsar von Hofacker began law school in 1920. From 1927 on, he worked for Vereinigte Stahlwerke in Berlin, where in 1938 he was a senior manager with general commercial power of attorney. In 1931 he joined the Stahlhelm (Steel Helmet), the federation of combat veterans. He was married to Ilse Pastor, with whom he had five children. A reserve officer, he was recalled to active duty in the Wehrmacht in 1939. Following the occupation of France in 1940, he served with the German military administration in Paris and later joined the staff of the military commander in France, General Carl-Heinrich von Stülpnagel, in the fall of 1943. Hofacker was Stauffenberg's cousin and acted as a liaison between the military opposition in Paris and Berlin. He also had contacts with the French resistance and with the Freies Deutschland (Free Germany) movement there. On July 20, 1944, Hofacker and Stülpnagel were responsible for the short-lived but very successful coup attempt in France. After the conspiracy failed, Cäsar von Hofacker was arrested in Paris on July 26, 1944. He was sentenced to death by the People's Court on August 30, 1944, and murdered on December 20, 1944, in Berlin-Plötzensee.